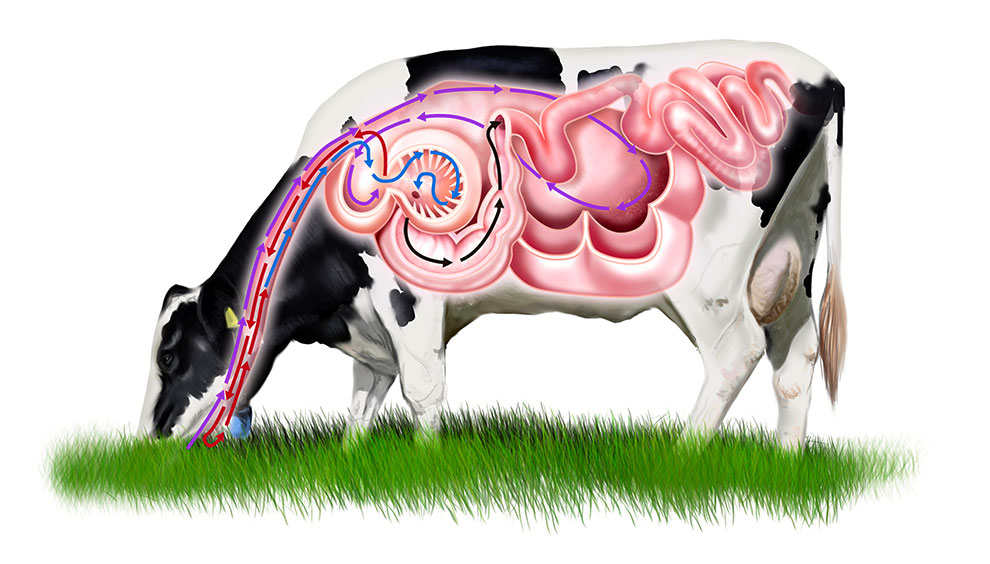 The production of biogas is a naturally occurring process in nature. In the absence of oxygen and without light, this accelerated process takes place almost everywhere where food is present for corresponding microorganisms.

Particularly interesting is the digestive system of many animals, which only feed on plant food. They must, in symbiosis with the microorganisms, break down the cellulose and hemi-cellulose in order to obtain appropriate nutrients, minerals and energy.

The basis for biogas production is simplified: proteins, starches, sugars, oils and fats. These are the primary linings.

The interaction of various microorganisms in the stomach of an herbivore, cellulose, hemi-cellulose and fibers are also digested, converted into complex starches and sugars and thus made available to the animal for recycling.

The main players are the microorganisms for hydrolysis, acidification, sedimentation and methane formation, as well as very specialized methanogens, which build up hydrogen and carbon dioxide; (methane).

In hydrolysis, all carbohydrates, proteins but also cellulose and fibres are broken down by hydrolysis of microorganisms and converted into fatty acids, amino acids and alcohols.

Hydrolysis is the initial and most important process step in biogas production and is neglected in 99% of all plants - especially in single-stage biogas plants.

In acidification the fatty acids from hydrolysis are further broken down by the corresponding microorganisms, butyric acid, lactic acid and alcohol compounds are formed.

Without a good hydrolysis, acidification cannot or only partially promote further acidification. The microorganisms cannot utilize carbohydrates, proteins, etc. - i.e. original feed materials - and are dependent on the preliminary stage of hydrolysis. Basically, both processes run under very similar conditions and framework parameters.

The final step in producing the actual feed for the methane-forming microorganisms is the preparation of the food: Acetic acid.

Butter and lactic acid are further reduced to acetic acid by the vinegar-forming microorganisms and carbon dioxide and hydrogen are produced as by-products.

In the final step, methane-forming microorganisms produce methane from acetic acid and under very stable, optimal conditions for the organisms - from hydrogen and carbon dioxide.

The acetic acid and especially the methane formation are very sensitive processes and the organisms need optimal conditions to achieve maximum efficiency.

Every disturbance - even the feeding itself - causes a short reduction of the methane production. The reproducibility of the organisms is relatively long and they can only adapt slowly to new conditions.

Process in a biogas plant

From the very different process conditions it is easy to see that single-stage biogas plants can only be a compromise for the microorganisms.

In single-stage biogas plants, the microorganisms for hydrolysis and acidification cannot exploit the full feed potential for biogas production, as under the process conditions they are unable to digest cellulose, hemi-cellulose and fibres for further processing. This effect is particularly serious for feedstocks with high cellulose and fibre content.

In our multi-stage plants, the maximum feed utilisation - including cellulose, hemi-cellulose and fibres - and conversion is guaranteed under the optimum process conditions for the microorganisms in all process steps.

Our multi-stage compact biogas plant can work not only in two stages but even in several stages and provide the respective microorganisms with optimum conditions in order to guarantee maximum biogas or methane production.